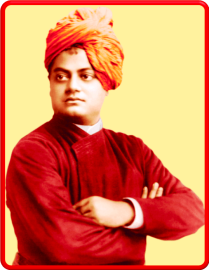 Like fire in a piece of flint, knowledge exists in the mind; suggestion is the friction which brings it out

There are certain works which are, as it were, the aggregate, the sum total, of a large number of smaller works.

Watch a man do his most common actions; those are indeed the things which will tell you the real character of a great man

The men of mighty will the world has produced have all been tremendous workers — gigantic souls, with wills powerful enough to overturn worlds, wills they got by persistent work, through ages, and ages

A fool may buy all the books in the world, and they will be in his library; but he will be able to read only those that he deserves to; and this deserving is produced by Karma. Our Karma determines what we deserve and what we can assimilate.

If what we are now has been the result of our own past actions, it certainly follows that whatever we wish to be in future can be produced by our present actions; so we have to know how to act.

Work for work’s sake. There are some who are really the salt of the earth in every country and who work for work’s sake, who do not care for name, or fame, or even to go to heaven. They work just because good will come of it.

Love, truth, and unselfishness are not merely moral figures of speech, but they form our highest ideal, because in them lies such a manifestation of power.

All outgoing energy following a selfish motive is frittered away; it will not cause power to return to you; but if restrained, it will result in development of power. This self-control will tend to produce a mighty will, a character which makes a Christ or a Buddha.

But we have to begin from the beginning, to take up the works as they come to us and slowly make ourselves more unselfish every day.

To the man who has begun to hate himself the gate to degeneration has already opened; and the same is true of a nation.

Our first duty is not to hate ourselves, because to advance we must have faith in ourselves first and then in God. He who has no faith in himself can never have faith in God.

Posting the second video of Nick Vujicic in a span of 2 mins!… Inspired and touched by this amazing person… When each of us worry about jobs… and relationships..and families… And when we are in this mad rush of this world..It’s good to take a time-out and wonder…

Are we are grateful for all that we are blessed with??